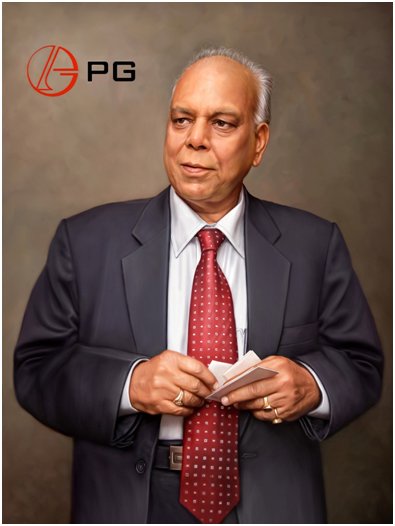 A visionary, a first-generation entrepreneur, and a natural leader, Mr. Promod Gupta founded the PG Group in 1977. An engineer from The Birla Institute of Technology & Science, Pilani's Class of 1966, he started off as a senior scientist at the Defense Research and Development Organization (DRDO), where he worked on development and testing of semiconductor for use in various defense systems and installations from 1966 to 1978. While working at DRDO, he invented a new strain gauge, an achievement which earned him the President's Award. In 1984, he was elected as Fellow member of the Institution of Electronics and Telecommunication Engineers (FIETE). But possessing an innate entrepreneurial nature, he wasn't satisfied, and when he saw an opportunity in the electronics space, he grabbed the chance.

In 1975, he started making transistor radios at a small workshop on the terrace of his house, and soon started a TV repair venture on the side. To focus on PG full time, in 1977, he made the decision to leave the safety of his respected government job and faced a lot of resistance for the same. Nevertheless, even in the face of naysayers, he kept going, soon launching a proprietorship to manufacture deflection components for black and white TVs. Realising the need to supplement his technical skillset with some commercial know-how, he went back to school to complete a Postgraduate Diploma in Marketing and Sales Management from Faculty of Management Sciences, Delhi University in 1977.

In the early 90s, after forming a good working relationship with brands like Weston, Televista, Beltek, and Singer as a TV components manufacturer, PG made the big leap to manufacture complete TV sets. In 1995, PG opened its first factory in Noida, soon acquiring brands like Onida as one of its key customers. After that, there was no looking back, and PG became the leading player in the Indian TV manufacturing market, adding new businesses like plastic injection moulding, PCB assemblies, motor manufacturing, CFL manufacturing, product assemblies, and finally ODM products.

A great mentor, and always leading by example, Mr. Promod Gupta worked relentlessly to grow the organization from a one-man operation to a huge enterprise employing 2000+ people. Inculcating principles like transparency, camaraderie, and dedication in the company culture, he moulded PG into a customer-driven organization, with a never-say-die attitude. His open nature, his adaptability to change and his ability to evolve quickly are all traits reflecting prominently in the company he founded. Committed to upholding his glorious legacy, we dedicate our journey forward to the man who started it all with nothing, but a dream.